I received some great questions and answered a couple of them in my previous post. Here are the answers to the rest of your questions. 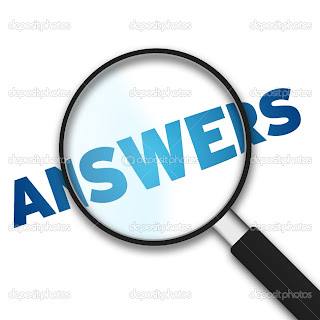 In my post inviting questions I posed one of my own.  Why is it when it comes to discipline, I have some expectation that my husband has given it a lot of prior thought and has the consequences and fine detail all planned out in advance?  I expect him to have a plan and to stick with it.

Wilma posed the following question in response to mine:  Rick, why can't you have everything planned out ahead of time for Roz?
Rick's answer: The act of disciplining Roz is a very sober moment for me and I do not enjoy it or find it easy to do. It is something that I think long and hard about and debate in my mind what should be the appropriate punishment. I may know what the punishment is going to be straight away but other times I may be settling upon whats appropriate right up to the time of administering the correction. I do not want to be in a situation where I tell Roz what a punishment is going to be and she mentally prepares for it on that basis only to find that I have changed my mind for whatever reason. Knowing Roz like I do, inside and out, she would struggle if that was to happen. No matter what the punishment is that I deliver to Roz, the most important thing is that she knows why she is being punished and what my expectations are of her in the future. And as important as the punishment itself is the aftercare that follows.

Zoe asked: Is there a rule or request that he has made that gives you an unexpected insight into him and how he thinks or did you discover something that he found important but you never realised until he was in charge and there was a rule?
That is such a great question.  It's funny because when we first incorporated Dd into our relationship we seemed to go through a period where Rick would call me on little things I did that he either didn't agree with, or perhaps just irritated him.  It felt so foreign at the time as previously, he would never say a word and I would be oblivious to how he felt.  It was kind of a learning curve for me - really?  I never knew you felt this way.

I have always had low self confidence and am prone to making negative comments about myself and to negative self-talk.  I vividly remember making such a comment not long after we incorporated Dd and receiving a lecture from Rick.  He told me that what I had said was false and unhealthy.  What really got to me though was that he told me hearing me say such things hurts him and how much he hates it when I do this.  I had never previously realised how much this affects him.

This is something I am still prone to and Rick pulls me up on it every time.  It doesn't happen as often as it used to now.  This is, in part I think because I now know how it affects him.  Also, since Dd my self confidence has grown a lot.  I think it's because I feel safe and taken care of and know that he has my back.

Another thing I never realised until Dd was that he doesn't like it when I up and leave the room for any reason when we are spending time together without saying anything.  He told me early on that he considers it a courtesy to tell him first. Honey, I'm just going to (whatever).  I try to ensure I do this and he affords me the same courtesy.

If you could go back and talk to the old you, when you were in high school and inform yourself of 4 things, what would you say?
I would definitely tell myself to not ever start smoking! (I was a late starter to smoking)

Not worry so much about what other people think of me and to follow my own gut rather than do things because it's what I think others expect.

I would tell myself that maybe my Mother is right when she constantly keeps telling me good things come in small packages :)

That I am worthy and capable and to have more confidence in my abilities.

What's the most unusual food you've ever eaten?
Hmm, I'm not sure I could say I've really eaten anything unusual.  Rick apparently ate coal as a toddler though LoL

Did you have a childhood ambition and did you achieve it?
I had many different ambitions as a child.  At one point I wanted to be a nurse, then I wanted to work with children, perhaps teaching.  After that, I wanted to become a vet or work with animals in some capacity.  I also fancied myself as a writer at one point.

No, I didn't achieve any of them LoL

Who brought the Dd lifestyle to the table?
I am currently working on a post about how we began Dd and our journey so far and will provide more detail in that post.

In short, we had always incorporate low level D/s and spanking in play and decided we wanted to find a way to incorporated it into our relationship outside of the bedroom.  We weren't sure how to go about it, or what it would look like and Rick discovered Taken In Hand and from there we slowly discovered Dd.  We had a few stops and starts with it but it was Rick that initiated it again this time.  I guess you could say the idea of such a relationship was a joint decision but Rick initiated the lifestyle.

What is your favourite colour?
I'm rather girly so I love purple, pink and blue.

What is your favourite food?  the worst?
Hmm, I think it's easier to say the foods I don't like first.  I don't like any seafood, apart from fish fillets LoL, olives or what I call 'earthy' vegetables such a spinach, silver beet, brussel sprouts.

Other than that I enjoy most types of food and have a sweet tooth LoL.  I enjoy Italian, Asian and Indian dishes among others and love traditional home cooked roast.

My favourite meal would probably be a cooked brunch - bacon and egg with all the trappings. Yum!

Elisa asked:  What is you favourite way that Rick expresses his love to you - something that cannot be bought? And what does he love the most about what you do to express your love for him?
Rick's answer:  My favourite way the you show me that you love me is the fact you submit to me.  What an honour for me.

I just love that answer!  I feel the same way.  The greatest way he shows me his love for me is the fact that he has taken on the role of leading our relationship.  I know that is not something he takes lightly.  It is a huge responsibility which he takes very seriously.  In my opinion, I don't think any man would take on this role unless he loved his wife/partner and was committed to her and to the relationship.

I love the little things he does, which are actually very big things.  The way he looks at me, smiles and tells me I'm beautiful.  The fact that when I am stressed he will tell me to sit and relax and play with my hair, rub my back etc to relax me.  He is extremely jealous of our alone time together and doesn't like anything distracting us from focusing on each other.  In fact, we have a couple of rules to help ensure there are no distractions.

This may sound strange but another of my favourite ways in which he shows me his love is by taking me in hand when I exhibit unhealthy behaviour, such as putting myself down.  To me, this shows me how much he cares.

Thank you all so much for your questions.  We enjoyed answering these.
Posted by Roz at 04:31