I was both thrilled and honoured to be asked by Ami to write a post on the subject of spanking and tolerance levels.  Recognising the fact that this is something that varies depending on where you are in your ttwd dynamic and how long you have been in a ttwd dynamic, we thought it would be interesting to get different perspectives from someone relatively new to ttwd and someone a little more experienced.

So.  Ami has written a post from her perspective as someone 5 months into ttwd, click here to read her post and I will attempt to bore regale you with my perspective from my 18 months of experience.

A while ago I wrote this post on how our tolerance level can change from spanking to spanking and attempting to figure out why that is.  I received a lot of great comments to this post and realised that there are many factors that can influence this, which I will discuss further on in this post.

Play spankings however are much more serious.  In this scenario we enter Dom/sub mode.  Rick is extremely dominant and I am submissive to him.  He will issue instructions for example and I follow them without question.  The spankings are much more intense and yes, in this mode he does enjoy inflicting a certain amount of pain.  That is not as bad as it sounds and it must be remembered that this is all entirely consensual.  Both of these kinds of spanking have their place for us.

One thing I find interesting is that I would say in general I have a fairly high tolerance to the pain of a spanking.  However, since incorporating Dd I am convinced this has actually diminished to a degree.

What this means however, is that my tolerance to ALL spankings has diminished to a degree as I tend to attach a level of emotional significance to any spanking. Having said that however, I definitely have a higher tolerance when it goes to erotic/play spankings than Dd spankings.

The other thing I find interesting is that quite often a Dd spanking will be lighter than a play spanking.  Don't get me wrong.  That in no way means it isn't hard and sometimes difficult to take because it certainly is.

When it comes to Dd spanking, Rick takes no enjoyment in spanking me or causing me pain and it is not sexually charged.  His aim (pun intended) is to reinforce our roles and get his message across.  It is not to cause me pain.  Hence, the spanking is often lighter than in would be in play.

I say often because of course that depends on the reason for the spanking.  How serious the issue leading to the spanking is and his feelings about it.  I have certainly endured some pretty serious spankings!  We often hear about the moment our HoH finally 'gets it' and delivers a spanking we don't want and the shock of that happening.  I think this post describes the moment this happened for us.

Now that I have told you a little about us, our dynamic and a little about how I personally react to spanking, I will move on to some more general topics.

Most of us would equate tolerance with tears and they are certainly an indicator of our tolerance.  I'm not sure however, that lack of tears means we haven't reached our tolerance.

I rarely cry during spankings and Rick's lectures don't always make me cry. However, this doesn't mean I haven't reached the limit of my endurance or that they don't 'work'.  Quite often it takes me a while to process a spanking.  I am usually quiet and reflective for some time afterwards and feeling incredibly vulnerable and submissive ... squiffy if you will.  I want to just curl up in his loving arms.  Quite often tears may fall some hours later while cuddling into Rick as I reflect on the spanking and the reasons for it.

There are many things that can affect our ability to tolerate the physical pain of a spanking.  These include our emotional and physical state at the time as well as hormones for example.  Then of course, there are the more obvious factors such as implement choice and intensity.

I will discuss some of the more common factors below and how they affect me.

Of course, the intensity is a huge factor in our tolerance to the spanking.  This is something that has changed a great deal over time for us.  I remember my first spanking since incorporating Dd.  It was a punishment spanking since at that time we hadn't yet included role affirmation spankings.  There were a lot of emotions surrounding it and the issue itself was quite serious.  We we also both highly nervous but I was so impressed (in hindsight LoL) with the confidence that Rick showed and his determination to follow through.

There is no real comparison between that spanking and what I would receive now.  Rick has certainly upped the ante slowly over time.

I think intensity is one of those things you can get used to and (I hate to say it) there is a need to slowly increase the intensity of spankings over time in order to keep them effective.  I believe it is possible to become 'conditioned' to spanking.  If it is too predictable, you are able to focus on getting through it and not letting the spanking do its job.  It becomes more something to just get through.

As the HoH becomes more comfortable and confident in his role and understands that he is not harming his wife the intensity naturally increases.  Also, and perhaps most importantly, as he develops trust that this is really want his wife wants and that she is fully on board with this lifestyle.  Even when the wife has brought Dd to him, he still needs to trust that it is what she really wants.

Rick will usually deliver a flurry of swats, then take a break while he lectures and asks questions followed by another flurry of swats.  The breaks allow me to catch my breath and recover somewhat before the next flurry and that makes a huge difference to how well I tolerate the pain of the spanking.

The position also makes a difference.  Our spankings are usually OTK, OTB or leaning into the back of the couch.  I like OTK because of the intimacy and closeness it provides.  However, I  find it the easiest.  Perhaps, because it doesn't allow as much swing and intensity.  Shush, don't tell Rick I said that!

The most difficult for me is on my hands and knees with my butt in the air.  I think the reason for this is a combination of the skin being more taut and the ability for Rick to spank with greater intensity in this position.

This is perhaps the most interesting factor.  I have found that I can become used to some degree to an implement.  However as I said in my earlier post, there are times that I can surprise both of us by not handling a particular implement as well as I usually do. 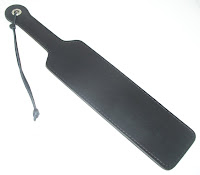 When we first started using the leather paddle it was very effective.  However, it is now the implement that I can become numb to.  Now days when the paddle is used it takes more intensity in order to be effective.  It is also far less common now for Rick to only use the paddle, although it does feature in most spankings.

Having said that, interestingly enough this was also the implement Rick was using when I wrote my earlier post.  I guess it goes to show that sometimes our reactions and tolerance can surprise us.

This really depends on the intensity.  Sometimes it doesn't have much of an impact yet others, it feels like a wooden paddle!  I do find the hand is more effective when used before another implement. When it comes to the hand I think the position makes a huge difference as well.  For example, I find it difficult if I'm on my hands and knees. 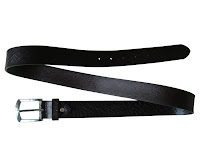 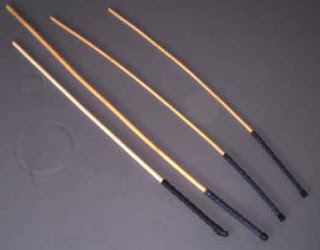 My most dreaded implement.  I find this extremely difficult with little intensity.


Emotions and hormones play a big part in our ability to handle a spanking. As we know there can be many emotions surrounding a spanking.  Many TiH's say that it isn't the pain of the spanking itself that pushes them to their limit, it is the emotions behind it and the same is true of me.

As well as the pain of the spanking and ability to tolerate pain, there is also the wealth of emotion behind it and this emotion can overwhelm and we can be pushed to our emotional limits.

Rick has well mastered the art of discussion and lecturing prior, during and sometimes after a spanking.  With discipline/punishment this forces me to acknowledge and think about my actions and why they were not appropriate/acceptable.  This creates feelings of remorse and disappointment in myself hearing the disappointment in his voice and realising how my actions have affected him.

If anything is going to bring me to tears, it is quite often his words.  However, the best thing about these spankings is that they provide a clean slate and allow me at the end of it to let go of those negative emotions and instead be enveloped in his love and care.

When it comes to role affirmation, the lectures are about where we are at and where Rick would like us to be.  He also reaffirms his love for me and tells me things I have done/am doing that he is proud of as well as areas he would like me to work on.  This is a very intimate and loving discussion that creates a lot of emotion in me also.

In our experience we have discovered the importance of changing things up when it comes to spanking.  If it becomes too predictable it becomes far less effective.  For me it can become something else on the 'to do' list and something I just want to get through and get over with.

For this reason we have found variety to be important.  Rick is very good at making every spanking different, even if the changes are subtle.  This means I am unable to predict the course of events and that leaves me feeling vulnerable and him in control of the situation.

As an example, once Rick has decided a spanking is over he always used to put the implement(s) away while leaving me in position, a sort of version of time out to allow me to calm and process before cuddling me and reassuring me of his love for me.  Usually during this time he also conducts what I would call a wrap up lecture.

Thank you so much Ami for inviting me to write this post.  Writing this has been a great exercise for me and has given me a chance to reflect on how we do things and to understand my own reactions a little better.

Disclaimer:  I hope I haven't frightened anyone by my comments in relation to intensity and the need to increase this over time.  This is written entirely from my perspective and the situation differs for each couple.  How we react to, and our tolerance to spanking also differs from person to person.   Each couple finds what works for them and some may well find there is no need for this.  I would also like to point that this is something that occurs slowly over time and as each of us become more and more comfortable and confident in their role.
Posted by Roz at 07:53