Off To A Spanking Start

Well, this has definitely not been the start to the new year I had hoped for. For a start, so much for summer!  The rain is pouring down as I write with extremely strong gale force winds.  It has been fairly warm though.


New year's eve did not go at all as we had planned.  An external situation occurred and that was the end of the celebrations as we had to deal with that.  Or rather, Rick did.  I am not proud at all to say Scrappy reared her head full force.  Worse, I'm ashamed to say it was a full on tantrum and I also completely distanced myself from Rick.  Even took myself off to the spare bed in my stupor.  Yeah ... ouch!

Well, he was having none of that let me tell you!  I was quickly dragged back out of the spare bed, marched into our room and bent over our bed. And so dear friends, this is the sad tale of how Roz managed to get spanked very early into the new year!

He was angry.  Very angry.  I knew from the fact he used the belt.  For some reason he doesn't tend to use the belt for discipline or role affirmation spankings.  It mainly tends to get used for fun ... ha!  I want to clarify too that yes, he was angry, but remained totally in control the whole time.  There were no raised voices, angry words or overly harsh spanks.

It doesn't just end there.  Oh no, there is more!  Shortly I will be sitting down to write 200 lines ... and have another spanking over my head for not following bedtime orders (for the umpteenth time!).   Let me tell you, waiting for a spanking truly sucks!

Honestly, I don't know what has gotten into me.  Why my submissiveness has suddenly taken a hike.  Or perhaps I do.  DD for us has been more in the background recently and it's amazing when that happens how old coping mechanisms and habits can literally come back to bite you in the a#$.  All I know is that I need to get my act together.

After the spanking we talked about how things had taken a back seat lately and Rick said he took responsibility and that it was a case of letting life get in the way and that he was going to get us back on track.  I acknowledged that I hadn't been playing my part either.

Well, I guess you could say we are getting back on track!


I am honestly glad he did step up and spank me for my behaviour new years eve.  It really showed me that, even though DD had taken a bit of a back seat lately, and there was a pressing situation demanding his attention he remains committed to us and to this lifestyle.

That makes me happy.

Now, if I can just get my act together! 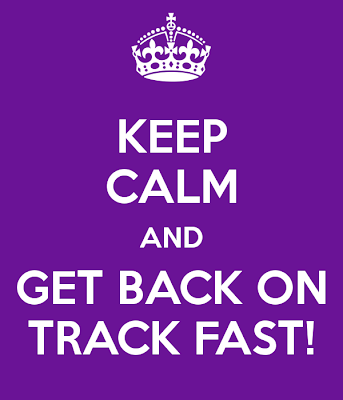